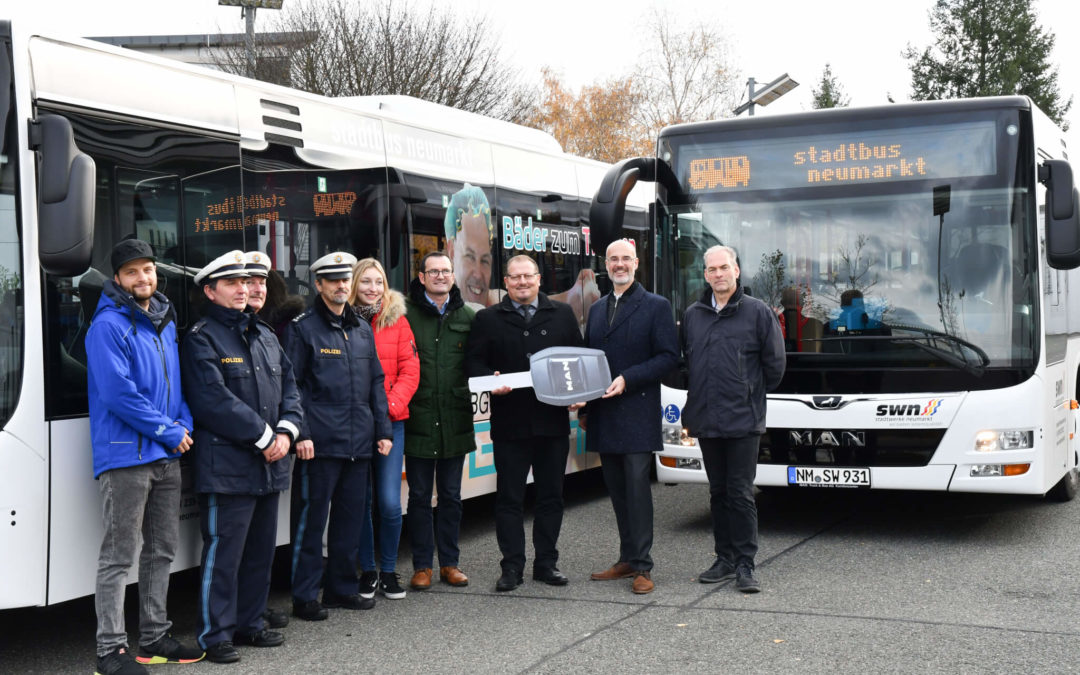 NEUMARKT. Stadtwerke Neumarkt i.d.OPf. have two brand new MAN low-floor buses in their vehicle fleet. The special feature: These are the first two public transport buses that are equipped with state-of-the-art turning assistants. Stadtwerke Neumarkt is one of the few local transport providers in Germany that already has this modern technology. The warning systems always sound the alarm when road users are in the so-called “blind spot”; in the area to the right of the vehicle that the driver cannot see despite the mirror. Pastor Joseph Dantas and Pastor Michael Murner solemnly blessed the vehicles under the eyes of Mayor Thomas Thumann, Stadtwerke boss Dominique Kinzkofer and deputy head of department Degenkolb at the Neumarkt bus station.

“Pedestrians, cyclists and children are among the most vulnerable participants in road traffic,” says Mayor Thomas Thumann. “With the turning assistant, the city bus ensures that this group will be able to move much more safely on Neumarkt’s streets in the future. I am very proud that our public transport company is the first in the region to use this life-saving technology. ”

Blind spot detectors are not yet widespread in local public transport. This is mainly due to the fact that the technology for buses is still relatively new. Stadtwerke Neumarkt will use the two vehicles with turning assistants in regular service with immediate effect. If the system proves itself, the local company will retrofit eight more city buses by February 2020.

Stadtwerke Neumarkt i.d.OPf. decided in the spring of this year to invest in blind spot detectors. A few days ago the Federal Ministry of Finance announced that it would support the acquisition of the public transport company with a sum of 15,000 euros. “We are of course pleased,” says Stadtwerke managing director Dominique Kinzkofer. “Our bus drivers often have to deal with confusing situations, especially in city traffic. The blind spot warning not only gives the other road users more security, but also the drivers themselves. ”

The two new city buses are equipped with camera-based turning assistants from TurnCAM – a system that independently detects critical traffic situations. A camera is attached to the outside above the bus door that monitors an area 2.50 meters long and 6 meters wide on the right-hand side of the vehicle – the blind spot. Every time the bus driver turns the indicator on when turning right, a 10-inch screen automatically comes on in the driver’s cab, showing the camera image. If a person steps into the danger area, the so-called “detection box” sends a signal to the screen, which immediately changes color from green to red. At the same time, an alarm signal sounds to alert the driver acoustically to the dangerous situation.

“The blind spot regularly puts cyclists and pedestrians in life-threatening situations in Neumarkt,” says Deputy Head of Department Degenkolb. “That is why we welcome every measure that helps to reduce the risk for road users.” The city bus and the Neumarkt police also do other preventive work to ensure more safety in local bus traffic. Several times a year they jointly organize practical road safety training courses. Schoolchildren in particular are made aware of the danger of the blind spot. “Actions like this in combination with the new turning assistants will make bus travel in Neumarkt that little bit safer.”